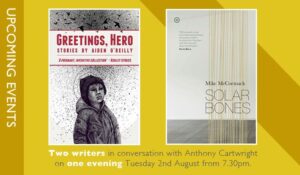 Join us for an evening of conversation and readings from two of Ireland’s most original and important writers.

Aiden O’Reilly ‘s short fiction  has appeared in The Stinging Fly, The
Prairie Schooner, The Irish Times, The Dublin
Review and several anthologies. The Irish Examiner described his debut collection as beautifully imagined and crafted.

Of Mike McCormack’s new novel Solar Bones, the Guardian said, exceptional indeed: an extraordinary novel by a writer not yet famous but surely destined to be acclaimed by anyone who believes that the novel is not dead …

Kevin Barry is a big fan.  So too is Colm Toibin who (also in the Guardian) recommended it for your holidays.

Asking the questions will be Anthony Cartwright author of Iron Towns, my favourite novel of the year so far.