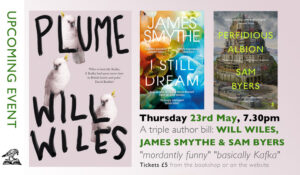 Three skilled authors of high acclaim have agreed to come together for just one night to give us their take on modern Britain, exploring the relationship between past and future, truth and memory, dystopia and orthodoxy.
‘In Care of Wooden Floors’ Will Wiles had us marvelling at what the Guardian observed as “his eye for beauty” with a tale of perfection, frustration and solitude set in an unnamed oppressive post-soviet city. Plume brings us home to a more familiar landscape where the plumped and buffed surface of modern London belies an all-together darker, more chaotic and meretricious underside when two lives collide with shocking consequences, and catastrophe spirals upwards as well as down.

I Still Dream from expert fictional explorer James Smythe is described as “a haunting meditation on the implications of AI and what it means to live and die in the age of technology” by the bestselling writer of Station Eleven, Emily St John Mandel. Here we meet a clever young coder who creates Organon, named after a Kate Bush track, that grows into an imperative companion and as the story travels forward into the future, it presides over the unimaginable – a possible collapse of society itself.

Somewhere wedged between those two momentous scenarios, we have Perfidious Albion, the phrase whose dictionary definition refers to ‘duplicity’ and ‘treachery.’ This can mean only one thing, and you can be sure that Sam Byers dishes up plenty of Brexitty political power play upon a hill of hitherto complacency, that builds into a battle for viral supremacy against a backdrop of dwindling values versus the gloss of social media. We can’t think of three books that better depict the blurring of truth with satire in the current day UK. Good luck to us all.

Will Wiles, James Smythe & Sam Byers in conversation. was last modified: May 6th, 2019 by Bookseller Crow