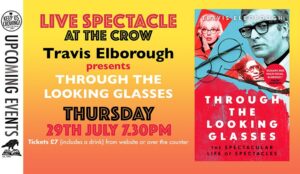 The humble pair of glasses might just be one the world’s greatest inventions, allowing millions to see a world that might otherwise appear a blur. And yet how much do many of us even really think about these things perched on the ends of our noses?

In this eye-opening history Travis Elborough traces the fascinating true story of spectacles: from their inception as primitive visual aids to monkish scribes right through to today’s designer eyewear and the augmented reality of Google Glass. And taking in along the way such delights as lorgnettes, monocles, pince-nez, tortoise-shell ‘Windsors’ and Ray Ban aviator shades.

Peering into early theories about how the eye worked, he considers the theological and philosophical arguments about the limits of perception by Greek thinkers, Roman statesmen and Arab scholars. There are encounters with ingenious medieval Italian glassmakers, myopic Renaissance rulers and spectacle-makers and opticians, brilliant, mad, bad and dangerous to know, in the Londons of Samuel Pepys, Dr Johnson and Sherlock Holmes.

We learn how eyeglasses were the making of the silent movie star Harold Lloyd and the rock n roller Buddy Holly and helped liberate an exasperated John Lennon from Beatlemania. Get hip to horn-rims with Dizzy Gillespie and Michael Caine And see girls in glasses through the lenses of the crime fiction by Dorothy L Sayers and Raymond Chandler and the full-screen figure of Marilyn Monroe.

Through the Looking Glasses is about vision and the need for humanity to see clearly, and where the impulse to improve our eyesight has led us. The society of the spectacle may finally be upon us . . . but how much of it do we really see?