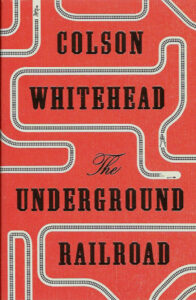 From prize-winning, bestselling author Colson Whitehead, a magnificent tour de force chronicling a young slave’s adventures as she makes a desperate bid for freedom in the antebellum South.

Cora is a slave on a cotton plantation in Georgia. Life is hell for all the slaves, but especially bad for Cora; an outcast even among her fellow Africans, she is coming into womanhood—where even greater pain awaits. When Caesar, a recent arrival from Virginia, tells her about the Underground Railroad, they decide to take a terrifying risk and escape. Matters do not go as planned—Cora kills a young white boy who tries to capture her. Though they manage to find a station and head north, they are being hunted.

In Whitehead’s ingenious conception, the Underground Railroad is no mere metaphor—engineers and conductors operate a secret network of tracks and tunnels beneath the Southern soil. Cora and Caesar’s first stop is South Carolina, in a city that initially seems like a haven. But the city’s placid surface masks an insidious scheme designed for its black denizens. And even worse: Ridgeway, the relentless slave catcher, is close on their heels. Forced to flee again, Cora embarks on a harrowing flight, state by state, seeking true freedom. 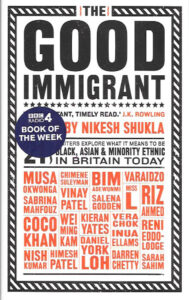 The Good Immigrant brings together twenty emerging British BAME writers, poets, journalists and artists to confront this issue. In these essays about race and immigration, they paint a picture of what it means to be ‘other’ in a country that wants you, doesn’t want you, doesn’t accept you, needs you for its equality monitoring forms and would prefer you if you won a major reality show competition.

Compiled by award-winning writer Nikesh Shukla – who has long championed the issue of diversity in publishing and literary life in the UK – this book will explore why immigrants come to the UK, why they stay, what it means for their identity if they’re mixed race, where their place is in the world if they’re unwelcome in the UK, and what effects this has on the education system.