Tim Clare’s The Honours is probably unlike anything else you’ve read. Clare, too, is a man that is hard to compare: commanding and self-deprecating; earnest and quick to laugh.

Tim Clare’s visit to Bookseller Crow is hard to capture in words, such was the energy and spirit of the writer, the pitch of the reading. But it was one of those rare occasions when meeting an author goes a long way toward illuminating a book, providing an extra dimension to the page. Clare admitted how much of a thrill it was to be able to talk about these characters that have lived so long in his head.

The Honours is a book about an assumed conspiracy and its agents. About the power of conspiracies in our collective conscience, Clare says:

“I think secret societies and the belief in conspiracy theories were the major motors behind some of the biggest events in the 20th century. Not in the sense that secret societies were controlling events, but that the fear that hidden cabals of groups with special interests – the Bolsheviks, the anarchists, the Jews – was used to great effect as an ideological lever with which to galvanise the populations of various countries. See Harmsworth’s war-scare serials in his boys’ papers and the Daily Mail leading up to World War I, the rash of spy thrillers, etc. Fascism more or less relies on a paranoid worldview where militarisation, secret policy and strict racial purification are the only ways to keep the nation safe. The main character in The Honours, Delphine, is absolutely a conspiracy theorist. But in 1935, that does not place her on some political lunatic fringe, but squarely in the centre of British politics. The Overton Window is more like a vast panoramic viewing gallery looking down upon chaos. She is scared, and she has taken refuge in the defiant, paranoid nationalism of the right.”

The book has monsters at its heart – and especially the problematic of the label of monster abnegating any moral responsibility. Asked if The Honours is fantasy, Clare said he would be ‘over the moon’ to be in the company of the likes of Ursula Le Guin. Reader-in-Residence remarks that the fantasy is experienced viscerally – that the violence, and there is plenty, is never stylised – and this wicked concoction of the believable with the downright bizarre is the reason that The Honours, much like the writer himself, defies description. As Jonathan put it: it’s a book that has to be read.

Signed first editions of The Honours are available here. 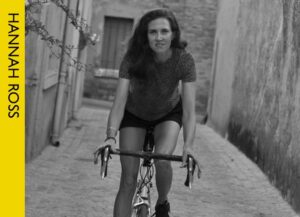 REVOLUTIONS: How Women Changed The World On Two Wheels by Hannah Ross is an alternative feminist history which celebrates the women who changed the world on their bicycles. Simone de Beauvoir borrowed her lover’s bike ... END_OF_DOCUMENT_TOKEN_TO_BE_REPLACED
View Calendar
Add