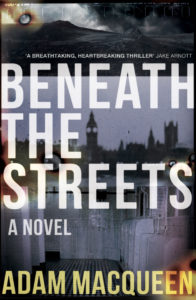 For our Crow Crime Club We are reading Beneath the Streets by Adam Macqueen.
The date to discuss this will be 13th May at 7.30. Whether this will be in the shop or online who can say.
As with our other book groups we will set up a WhatsApp, so feel free to contact us with your number if you wish to join in.
It is February 1976, and the naked corpse of a shockingly underage rent boy is fished out of a pond on Hampstead Heath. Since the police don’t seem to care, twenty-year-old Tommy Wildeblood – himself a former ‘Dilly boy’ prostitute – finds himself investigating.

Dodging murderous Soho hoodlums and the agents of a more sinister power, Tommy uncovers another, even more shocking crime: the Liberal leader and likely next Home Secretary, Jeremy Thorpe, has had his former male lover executed on Exmoor and got clean away with it. Now the trail of guilt seems to lead higher still, and a ruthless Establishment will stop at nothing to cover its tracks.

In a gripping thriller whose cast of real-life characters includes Prime Minister Harold Wilson, his senior adviser Lady Falkender, gay Labour peer Tom Driberg and the investigative journalist Paul Foot, Adam Macqueen plays ‘what if’ with Seventies political history – with a sting in the tail that reminds us that the truth can be just as chilling as fiction.

‘A thrilling and brilliantly imaginative novel. It takes you into the secret world of Soho in the 1970s. But then suddenly it opens another door into the hidden world of violence and corruption that still lies underneath the England we know today’

Adam Macqueen’s books include The Prime Minister’s Ironing Board and The Lies of the Land: An Honest History of Political Deceit. The King of Sunlight, his biography of the soap manufacturer William Hesketh Lever, was named by The Economist as one of its books of the year.

He has contributed to Private Eye since 1997, and wrote the bestselling history of the magazine which was published for its 50th anniversary in 2011. He is also on the editorial team of Popbitch, and from 1999-2002 was deputy editor of The Big Issue.

He lives on the South Coast with his husband, painter Michael Tierney.